WHY A WOMEN'S BAR

After 23 years of existence of the Women Lawyers’ Association of Greater St. Louis, I find people are still asking why we need a women’s bar association. The simple answer is that the problems which a quarter-century ago drove Charter President Judge Anna Forder and others to form the Women Lawyers’ Association of Greater St. Louis are still with us today. Inequality of pay, inequality of opportunity for advancement, difficulty of mentoring opportunities, and social pressures of life/work issues are all problems still facing women in the practice of law.

Almost a century ago, women attorneys in St. Louis formed the Women’s Bar Association of St. Louis and held meetings dealing with issues such as “career vs. marriage,” “women and social justice,” and “the advancement of women members of bar.” In 1975, confronted with roadblocks to career advancement and the inability of women to become judges, the current Women Lawyers’ Association was formed. A decade later, although women represented 20% of the bar, Missouri had no female Supreme or Appellate Court judges and only five Circuit or Associate Circuit judges in St. Louis City and County. This same concern has been the subject of several studies. The 1990 Missouri Bar study on gender bias found that gender-based stereotypes continued to adversely effect the judicial system. The 1995 ABA study, “Unfinished Business: Overcoming the Sisyphus Factor,” noted that while women constituted 37% of private practitioners, only 13% were partners and a wide income disparity exists between female and male partners. Recent studies report that women still earn 5 to 15 percent less than men in similar jobs. Just this past year, the Eighth Circuit U.S. Court of Appeals concluded its four year study on gender bias and found evidence that gender bias exists in the Eighth Circuit and adversely effects women judges, attorneys, litigants, and court employees. Furthermore, the percentages of female district court and circuit court judges are far below the average of other federal circuits.

The point is that gender bias and social stereotypes which adversely impact women in the practice of law are complex and continuing problems. Specialty bars such as the Mound City Bar Association and the Women Lawyers’ Association are necessary because they can devote all of their attention to longstanding social problems. My colleague and fellow bar president, Mr. Donald McCullin, expressed it eloquently in his recent article in the St. Louis Lawyer entitled “Minority Issues in the Profession: It is the Best of Times; It is the Worst of Times.” Mr. McCullin, President of the Mound City Bar Association, points out that is has been 44 years since Brown vs. The Board of Education became the law of the land and we are still grappling in St. Louis and elsewhere in the country with the issue of school desegregation. In some instances, heightened awareness of social problems and social change has caused a backlash against progress. Social change is not easy. It is not accomplished in a day, a month or a year. True change takes decades, even centuries, and progress ebbs and flows. We take two steps forward and one step back.

The Women Lawyers’ Association is uniquely able to focus its considerable resources on the issue of the advancement of women in the profession because we do not have competing interests for the Association’s time, talent or financial resources. Like other specialty bars, we welcome the opportunity to work jointly with the Missouri Bar, the Bar Association of Metropolitan St. Louis and other bars on issues affecting women attorneys.

As an independent bar, we can provide services to members that state and local bars are not able to provide. We step in as a mentoring force. We provide a collective voice for the appointment of qualified individuals to judicial positions and governmental commissions. We serve as a networking source for members and provide information on alternate career paths and non-traditional rainmaking. We offer a social support group and sympathetic sounding board for members who share common problems and concerns. We publicize ongoing problems with inequality of pay, unfair attorney performance evaluations and the continued under-representation of women and minorities on the bench. For more than a century, the women’s bar in St. Louis has fulfilled a need not met by the state or local bar. Sheer numbers of women in the profession have not eliminated the social stereotypes and gender bias problems of the past and, if history is any guide, the need fulfilled by the Women Lawyers’ Association is not likely to go away anytime soon.

The Need for A Women's Bar

Each year, it is my honor to host the WLA’s annual golf tournament. My office and I call upon local businesses to donate to the fundraiser for the Linda Murphy scholarship awarded annually to deserving female law students. To this day, we are still met with the questions, “Why does the WLA exist, and why do we need more female lawyers?” More harshly, one local company responded that not only would they not donate to the WLA, but if we could provide the contact information for the White Male Lawyers Association, they would call them to be a sponsor.

The problems facing women in the law remain, including inequality of pay, hurdles to advancement, balancing family and work responsibilities, social pressures, and lack of networking and mentoring opportunities.

The WLA was formed in 1975 to face these challenges. Strides have been made. But the ABA reports that while about 45 percent of associates are women, women represent only 20 percent of partners and 4 percent of managing partners in the largest 200 Law Firms. See ABA Comm’n on Women in the Profession, A Current Glance at Women in the Law (July 2014). These particular statistics are not reflective of the parity one would anticipate from “a decades-old pipeline of law school graduates.” S. Scharf, R. Leibenberg, & C. Amalfe, Report of the Eighth Annual NAWL National Survey on Retention and Promotion of Women in Law Firms 4 (Nat’l Ass’n of Women Lawyers’ Found., Feb. 25, 2014).

Earlier this year, the Wall Street Journal also highlighted “a persistent gender gap in the legal profession despite inroads made by women in the past four decades.” J. Smith, Female Lawyers Still Battler Gender Bias, Wall Street Journal, May 14, 2014. The article also notes that one third of U.S. lawyers and judges are now women, compared to a stunning 4.8% in 1970, but points out that women are rarely represented among the top ranks of the profession. Id. Joan Williams, a professor at the University of California’s Hastings College of the Law, attributes women’s continued falling behind to a subjective assessment system, commenting “It is all a series of back-room assessments and back-room deals. It’s just like a petri dish for gender bias.” Id.

Yet, women’s equal participation in the profession is critical to both ensuring the fairness of the legal system for all participants and safeguarding the legitimacy of the profession. N. Scherer, Diversifying the Federal Bench: Is Universal Legitimacy for the U.S. Bench Possible? 105 Nw. U. L. Rev. 587, 602-04 (2011).

While the day of female lawyers being mistaken for the secretary or court reporter may be fading (I have only been asked if I was the court reporter eleven times this year), there remain significant “unconscious biases held by women and men that hold women back. The biases affect how women’s performances are perceived and interpreted, which in turn affects the assignments and opportunities [women] get, their evaluations, their compensation, and their advancement.” See G.M. Filisko, Yes, Virginia, There is Still Gender Bias in the Profession, 41 ABA Student Lawyer No. 8, April 2013.

The need for a specialty women lawyers’ association remains in a society where gender bias and social stereotypes continue to stifle women. The Women Lawyers’ Association is able to provide both a networking and mentoring resource to female attorneys that is uniquely directed and particularly beneficial to them. Many commentators explain that women are held back due to a lack of guidance, mentoring, and business networking. The WLA assists in all three facets.

The organization provides CLEs throughout the year on topics relevant to and beneficial for the practice of law, In addition, WLA offers opportunities to meet and confer with female judges and legislators that provide exposure far beyond what any other bar committee or organization offers. Its annual legislative luncheon is uniquely suited to provide face-to-face contact. The fact that multiple generations of female lawyers are now available to provide information and mentoring in a supportive environment, speaks to the power and benefit of the group as a whole.

The organization also provides a bridge to other diverse bars to promote cooperation and understanding. Each February, it co-sponsors an event with the Mound City Bar Association and is a sponsor of the Unity Dinner, with Mound City and the Missouri Asian American Bar Association.

In addition, through the Linda Murphy Scholarship, the organization reaches out to aid and benefit law students, with the hope that they will give back and actively participate once licensed. WLA also reaches out to campus organizations and works with area law students. Each local school is invited to have a liaison who works directly with the board. The organization’s annual Law Day provides an opportunity for female high school students to be introduced to the judicial system.

Community involvement is a core part of the WLA. Through volunteer work with organizations, such as Habitat for Humanity and Center for Women in Transition, the WLA provides an opportunity for its members to learn the value of community service and provides an encouraging and collegial environment for doing so. The annual holiday party benefits various local charitable organizations.

The organization also provides a collective voice on the issue of judicial appointments and government commissions.

The WLA serves to honor those women who paved the road and made it a little smoother for generations to come. New female lawyers will never know the feeling of being the only woman in their bar passage class or the only female member of the judiciary. By actively participating in and supporting the WLA and its efforts to contribute to the community, to mentor others in practice, and to fund scholarships for those entering the profession, we acknowledge and honor the struggles and sacrifices of hose who made all of this possible and strive for a tomorrow where gender inequality is but a distant memory.

WLA, together with other regional Bar Associations, invites you to an upcoming CLE designed to help you develop effective tools to balance the high demands of the legal profession with your own mental health and well-being.

Proceeds from the event’s registration fees will be donated to the Missouri Lawyers’ Assistance Program (MOLAP).  As a co-sponsor, WLA has made a donation to MOLAP on behalf of its members.

See below for additional program details, available CLE credits and registration information.  A downloadable copy of the event flyer is available here. 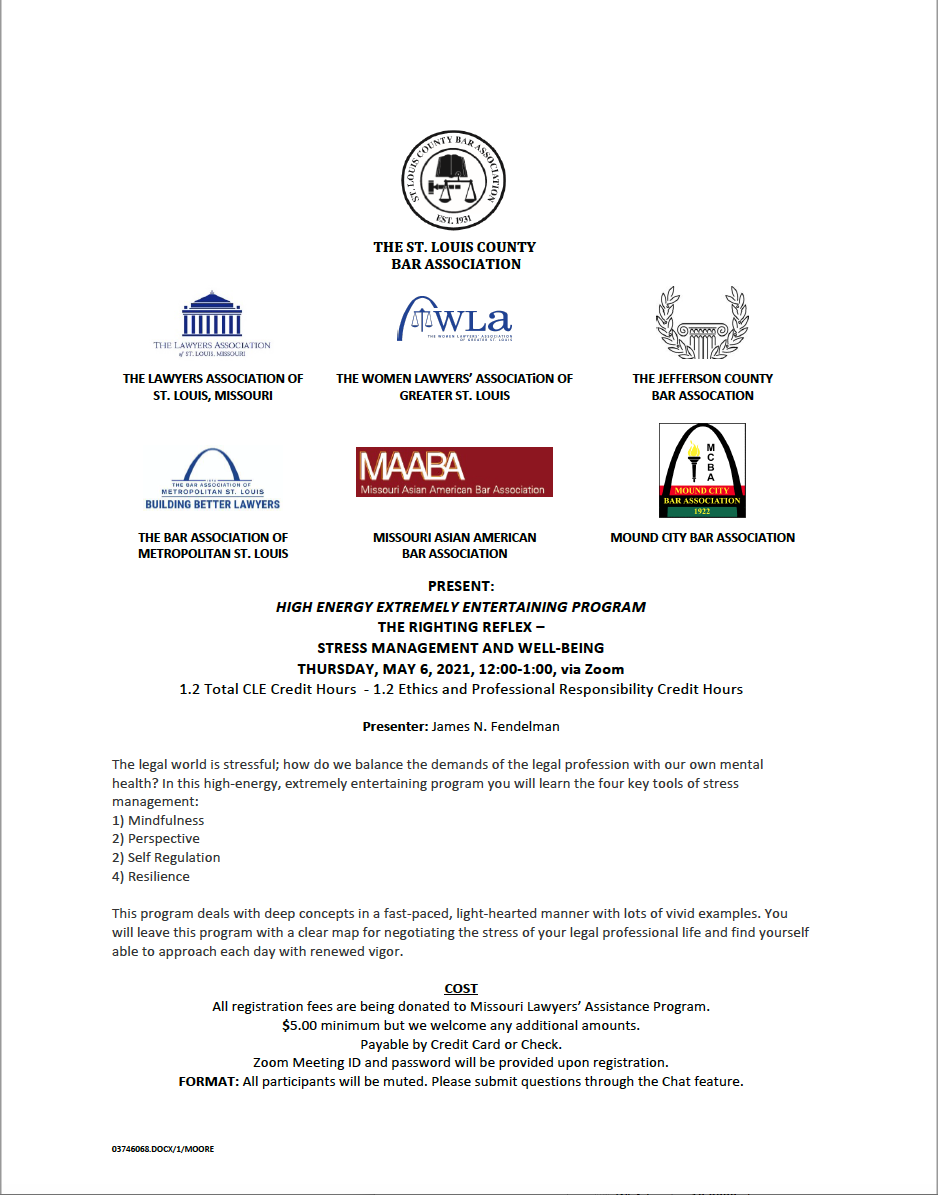 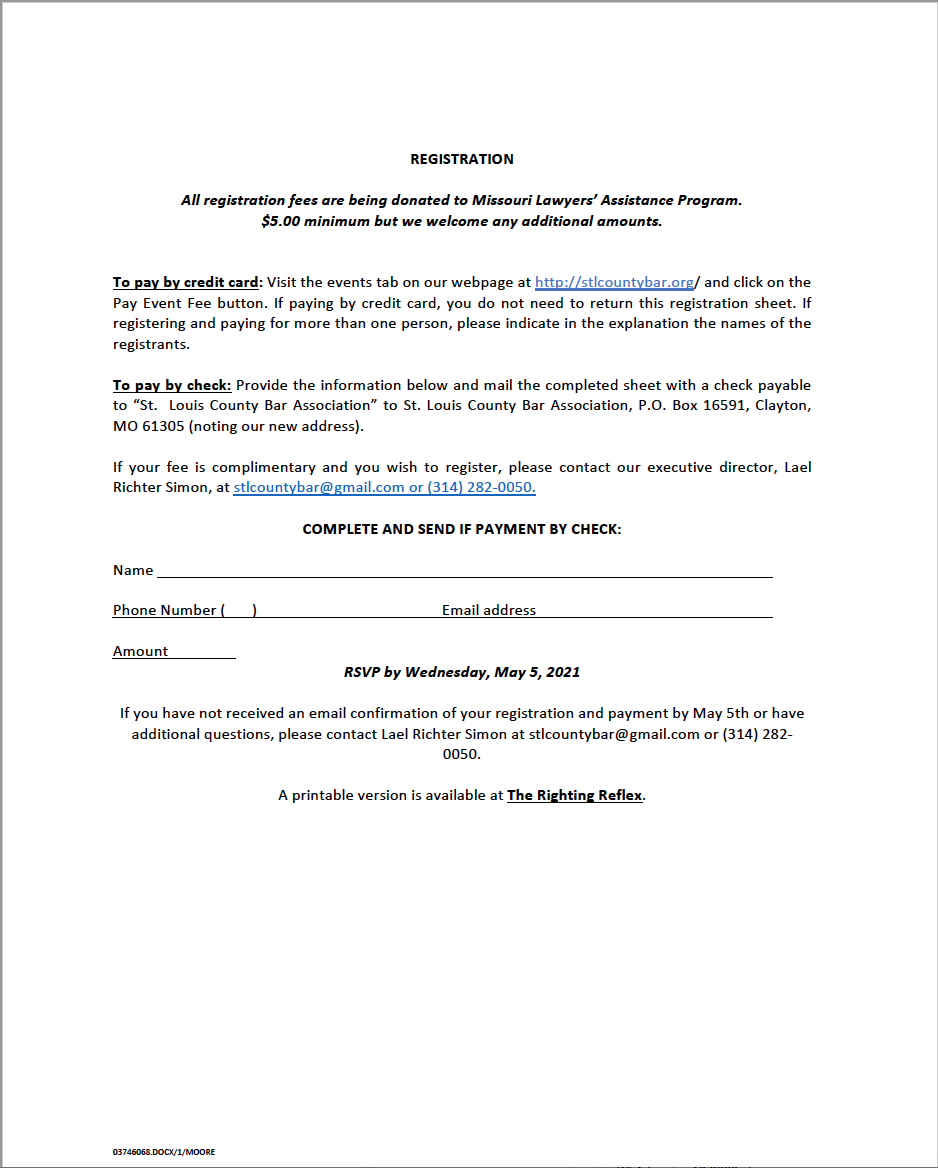 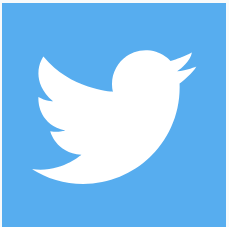 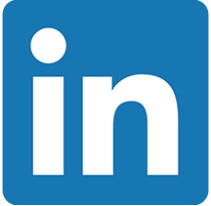 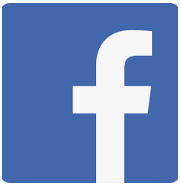